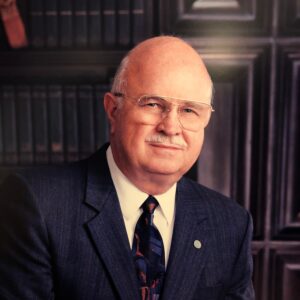 The National Association of Insurance and Financial Advisors (NAIFA) was sad to learn that Jack E. Bobo, CLU, FLMI, passed away on January 15, 2021, in Phoenix. Bobo was a legendary producer and leader in the life insurance industry who contributed the wealth of his talents and hard work to foster NAIFA’s success over several decades of his service.

Bobo was originally from South Carolina and upon his high school graduation enlisted in the U.S. Army Air Corps. He served during World War II and was an advanced flight instructor, according to the publication Voices From the Field: A History of the National Association of Life Underwriters.

He settled in Phoenix and became a general agent with New York Life in 1956. He joined NAIFA, then known as the National Association of Life Underwriters (NALU), that same year and continued as a loyal member for nearly 65 years until the time of his passing.

Bobo was a passionate and highly regarded advocate and spokesperson for the life insurance industry. During the 1975-1976 association year, as co-Chair of NALU’s Committee on Federal Law and Legislation, he testified four times in two months before congressional committees. This marked just a small sampling of his advocacy work, which became a hallmark of his career.

He was elected NALU President for 1977-1978. On January 1, 1979, he assumed the position of Executive Vice President, succeeding C. Carney Smith. In that role, the equivalent of the present-day NAIFA CEO, Bobo served as NALU’s active managing officer and executive in charge of its national headquarters staff until 1992.

As Executive Vice President, he instituted public information campaigns to bolster the reputations of insurance professionals and the products and services they provide. He led NAIFA’s advocacy efforts, including fending off several challenges to the tax status of life insurance products.

Bobo also recognized the association’s need to best serve members by adapting to the changing professional role of insurance and financial professionals. At the 1982 annual conference in St. Louis, he said: “The challenge to NALU will be to nurture the kind of maturity that will accommodate the differing philosophies that spawn a wide variety of marketing strategies. It is reasonably clear that we are not going to be as homogenous as in former times, and we will likely embrace a broader range of activities that are just now starting to be defined.”

This set a course that has led to NAIFA’s status today as the leading association for insurance and financial professionals in the United States, serving members with a broad range of practice specialties within the field.

In 1985, Bobo received the John Newton Russell Memorial Award, the most prestigious individual honor in the life insurance industry. The award citation issued by the selection committee stated:

“Jack E. Bobo, CLU, FLMI, by any test imaginable you are the consummate professional in life underwriting, who, by word and deed, has set a notable example of technical expertise based on long and intense academic preparation; adherence to the highest ethical standards; and steadfast devotion to your family, community, country and the Institution of Life Insurance.”

The award committee also proclaimed him the “Renaissance Man of Life Insurance” because of his prowess in marketing, administration, investments, and political advocacy as well as his achievement as a leading spokesperson for the industry.

Bobo was devoted to his family and married to his wife, Gladys, for 67 years until she passed away in March 2013. The Bobos’ son, Glen, followed his father into the insurance business and was a New York Life agent.