2021 was a year of change and disruption with a new administration and the continuance of the changing Covid protocol landscape. However, government has worked in a frenzied manner right up to the writing of this report and will continue to year-end. Some highlights of NAIFA-Arizona activity follows: 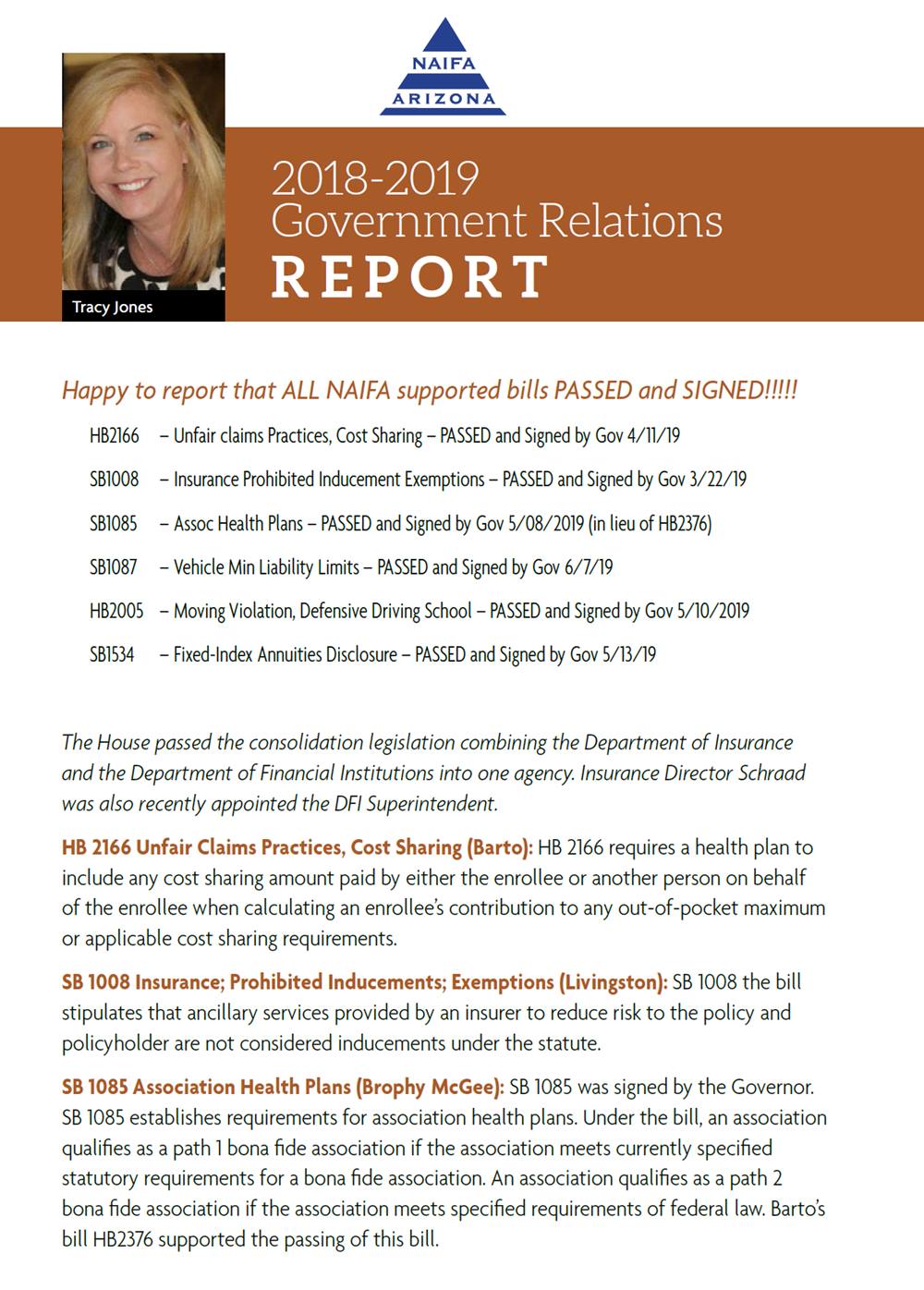 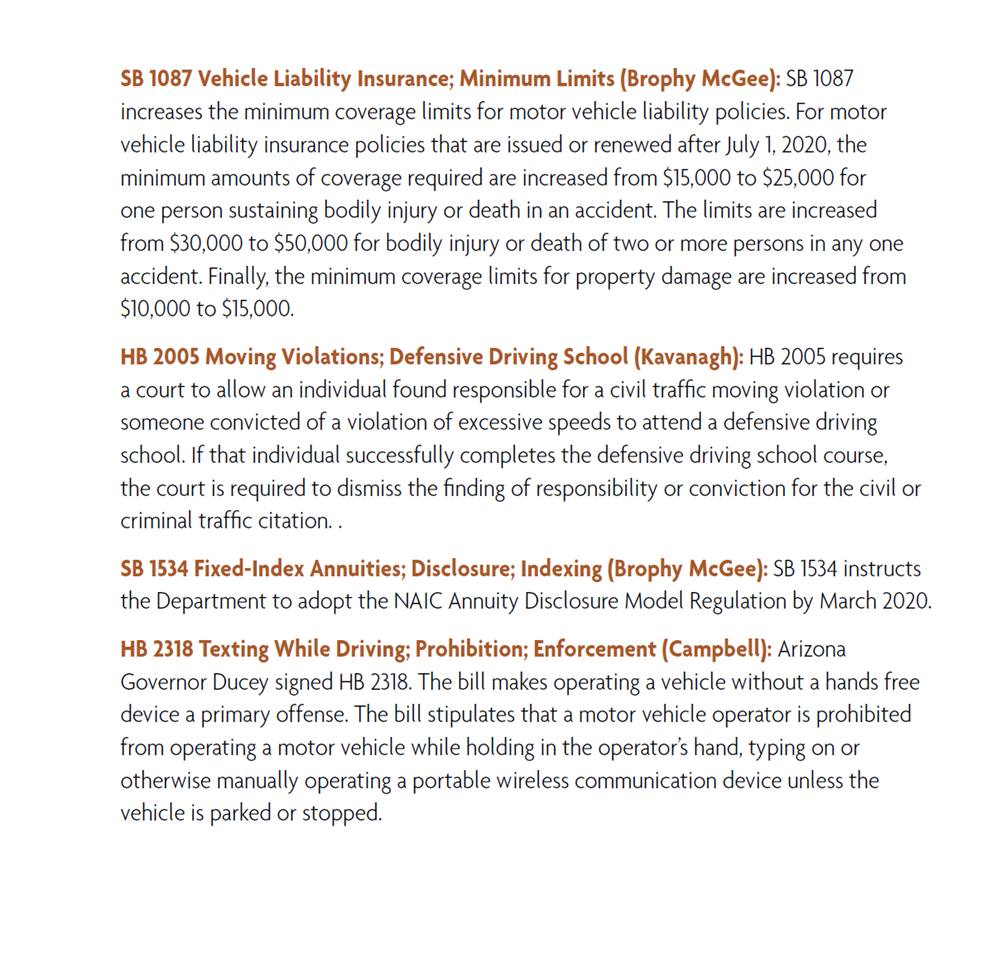 State:
HB 2098 insurance; inducements (Livingston): HB 2098 increased the aggregate value of prizes, goods, wares,
merchandise or tangible property an insurer or agent can provide a customer from twenty-five dollars to one hundred
dollars. Arizona has one of the lowest prohibited inducement restrictions in the country which limits the ability of
insurers and agents to provide promotional items to their customers. Current law allowed consumers to receive
promotional items that have a value of no more than twenty-five dollars. This bill updated the limit on promotional
items to be consistent with surrounding states of Washington, Nevada, Utah and Oklahoma which currently allow for
inducements up to one hundred dollars. Chapter 10, Laws 2018

HB 2124 life and disability insurance; insolvencies (Livingston): HB 2124 was model language from the National
Association of Insurance Commissioners (NAIC) amending the Life and Disability Guaranty Fund laws. This bill made
various changes to the Arizona life and disability insurance guaranty fund to address any potential insolvencies. Most
notably, the legislation included health care service organizations (HCSOs), also known as HMOs, as “member insurers”
of a life and health insurance guaranty association. Members of an HCSO will be entitled to guaranty fund coverage up
to $300,000 in the event of an insolvency. Under HB 2124, future long-term care insurance related assessments will be
split equally between the life and health insurance industries. The legislation provided a formula that allocates the
assessments between the life insurance and annuity assessment account and the health assessment account. The bill
applied a benefits cap to health benefit plans and asserts benefits provided by a long-term care rider are considered the
same type of benefits as the base life insurance policy to which it relates. The bill included variable rate policies if the
policy provides long-term care insurance benefits. HB 2124 increased the Guaranty Fund Board (Board) membership
from 9 to 11 members. It allowed the Board to reissue policies or contracts of an impaired insurer or an insolvent
insurer. The bill clarified that the Life and Disability Guaranty Fund may, when providing substitute coverage, issue an
alternative policy at actuarially justified rates, with the approval of the Director of the Department of Insurance. The bill
stipulated that if the fund reissues a terminate coverage at a different rate, the rate must be actuarially justified to the
risk. The Board was authorized to file for actuarially justified rate or premium increases for any policy or contract for
which the Fund provides coverage. The Guaranty Fund is authorized issue a substitute coverage for a policy or contract
without the approval of the court presiding over the delinquency proceeding. HB 2124 will take effect on December 31,
2018 and will be applicable to an assessment relating to a long-term care insurer determined to be insolvent after that
date. Chapter 64, Laws 2018

HB 2254 vehicle liability insurance; minimum limits (Carter)/SB 1075 vehicle liability insurance; minimum limits
(Brophy McGee): HB 2254 would have increased the minimum coverage limits for motor vehicle liability policies. For
motor vehicle liability insurance policies that are issued or renewed after July 1, 2019, the minimum amounts of
coverage required are increased from $15,000 to $25,000 for one person sustaining bodily injury or death in an accident.
The limits were also increased from $30,000 to $50,000 for bodily injury or death of two or more persons in any one
accident. Finally, the minimum coverage limits for property damage were increased from $10,000 to $25,000. In
addition to increasing the minimum financial liability limits for private passenger auto insurance, the bill made the policy
declarations page the final expression of a policyholder’s election for both uninsured and underinsured motorist
coverage. HB 2254 specified that the offering of uninsured or underinsured motorist coverage is required to be made at
the time of the application; however, the insurer is not required to reoffer uninsured or underinsured motorist coverage
as a result of a change to the current minimum liability limits. Vetoed

This was the year we dropped bill HB2353 which made it mandatory that all AZ insurance producers must take continuing education unless grandfathered in. This bill was supported by AZ DOI as they had been receiving increasing pressure from all other states due to our lack of this regulation in place. Other states had an additional burden added in having to research each nonresident from AZ to make sure that they had the necessary CEs for their state. This bill passed and was signed in 2014.

This was a year for regulatory reform dealing with Uber and Lyft. Not a lot that are members would care about.
This year also proved to be an exceptional election year in which NAIFA AZ was very involved in.

HB2002 was an insurance premium reduction bill which would reduce the tax added to insurance premiums from a 10-year reduction to a 6-year phase-out period, rates stayed the same as in 2015. This bill had been in play for many years and passed in 2016.

HB2279 Uninsured/Underinsured motorist. This bill passed and was signed in 2016 SB1441 dealt with the current laws regarding long-term care. Over the years the language had been changed by AZ DOI which clouded the dos and don’ts in the long-term care insurance world. Due to the vast premium increases in the LTC policy world, we were for this bill which would revert the regulations back to the original NAIC approved the language. This bill past and was signed in 2016.

HB2160 was a bill dealing with annuity training. The industry has been moving toward a direction of unity in dealing with annuity training. The NAIC approved language as to the parameters of this training and NAIFA unequivocally agreed that producers selling annuities should be trained in this product. This bill passed and was signed in 2017.
HB2279 was an interesting bill. On the onset, it is a bill that deals with the prohibition of fees being charged by life and health producers. It was to clarify who was NOT allowed to charge fees. The bill inserted “The DOI is authorized to order an insurance producer to refund all or part of a fee or service charge that the DOI determines failed to comply with the requirements. Insurance producers are prohibited from charging or receiving any fee or service charge in connection with the transaction of life, annuity, long-term care or Medicare supplement insurance.” We purposefully left out health insurance producers. With the onset of the ACA, health insurance agents are no longer receiving commissions for advice. The current law does not allow them to charge fees for advice. This bill was an effort to deal with this issue. Please note: the full bill does explain the guidelines for those fees. This bill did pass and was signed in 2017.

HB2048 (now added as a striker to SB2195) is the bill to watch this year. This is a clarification of HB2279 passed in 2017. AZ DOI needed clarification. In addition, due to the DOL regulations, more and more broker-dealers are pushing representatives to go fee-based. AZ current law would not allow for fees to be charged which creates an issue with products such as variable annuities, etc. This bill will allow for producers to charge fees by submitting the proper documentation to AZ DOI. This bill was in a “political quagmire” if you will with two legislators holding each other’s’ bills “ransom”. Due to this issue, we found a workaround by adding HB2048 language to SB2195 which has passed the Senate and was transferred to the house on 2/26. Both appropriations and rules committees have passed this bill and we anticipate the house to pass the bill.

HB2098 Raised the inducement limits to coincide with the FINRA/SEC rules of $100 gifting to clients. The current amount was $25 which, as you know, would limit the flowers you would send to a client to one daisy wrapped in newspaper (ok maybe that is pushing the point  ). This bill HAS PASSED and HAS BEEN SIGNED!

HB2124 dealt with the guaranty fund. Given the issues with the LTC insolvencies, NAIC adopted amendments for a 50/50 life and health insurers split. This would help further protect our clients in regards to LTC products. This bill has PASSED and HAS BEEN SIGNED!!